Ever since I was a child, I’ve been passionate about the sea.  From walking alongside it, to swimming in it as well as precious years hanging out with friends in the shelters on Portmarnock Beach.  When things have been really tough, I went to the sea and found comfort in the peace of it.  Breakups with boyfriends were spent throwing rocks into it and later on when my children arrived, I brought them there too and they love it now as well. 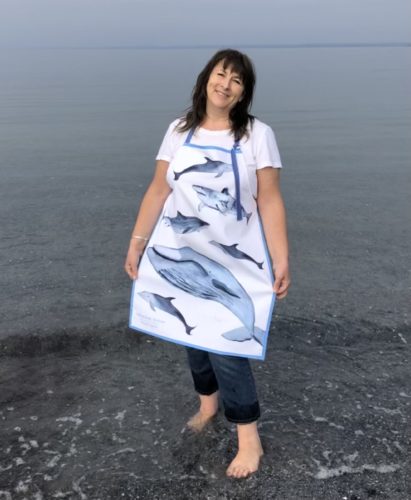 I’ve recently turned into an environmentalist.  Like most people these days, I didn’t plan to but I feel that it’s important now to stand up for what you love.  First it was the art on my greeting cards and now it’s the Ocean Lovers Apron.  Why an apron you may ask … good question!  It was the size that I liked, it was something that allowed me space to work with that I didn’t have on a tote bag or a cushion cover.

When I thought about what to call it, I looked at other designers and they had things like London and New York on them.  I’m in Galway these days but what if I moved somewhere else in Ireland.  Anyway, I decided on Planet Earth, because that’s what it’s all about.  It’s not a trade mark, it’s a location.

10% of the profits from the Ocean Lovers aprons will go to Sea Shepherd.  I love this organisation, they’re strong, effective and not administration heavy – meaning that everything that is donated to them goes directly to the cause.

Sea Shepherd is an international, non-profit marine conservation organisation that engages in direct action campaigns to defend wildlife and conserve and protect the world’s oceans from illegal exploitation and environmental destruction. Sea Shepherd was founded in 1977 by Paul Watson, one of the original members of Greenpeace. Since its grassroots beginnings it has grown into an unstoppable global movement with independent groups established in over 20 countries.

No products in the cart.